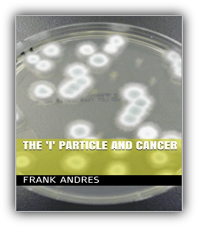 THE ‘I’ PARTICLE AND FIGHTING CANCER
by
Frank W. Andres
© Copyright, Frank W. Andres, 2018. All Rights Reserved.
This is a Minibook…..Instead of expressing an idea and then blowing the number of pages up, up towards three hundred just so we can charge $25 as is currently the fashion, we are presenting the kernel of an idea….in the hopes that ideas can be transmitted more rapidly and breakthroughs can occur now, not next century. There is a fifty percent chance that humanity will not make it through this century….it is important that we make as much progress as fast as we can…so as to avoid an untimely demise.
Introduction
What is an ‘I’ particle?…I believe that every atom has an ‘I’…Just as you have something ‘looking out’…I believe that every atom has a particle within it…capable of…’looking out’. Scientists are forbad contemplating such things…However, six different disciplines I have studied…point toward such a hypothesis….The fight against cancer has been throttled because crucial steps have been blocked…I believe that this fight can gain renewed vigor…if the power of the ‘I’ particle is allowed to open the way….I know this ‘I’ particle hypothesis is surprising….but science is being slowed in recent decades because of the futility of our instruments…things are either too small…or too fast to be measured correctly…or be discerned at all. I have proposed the use of an interdisciplinary approach to help overcome the inadequacies of our instruments. When we utilize such an approach…we uncover surprising things…. Let us start with philosophy and theology….In my book, Man and the Cosmos…I have a chapter entitled…’Man and a Cosmic Theology.’ This chapter begins with the following ideas… The strategy of the seventeenth century French philosopher, Rene Descartes (1596-1656), is important in organizing my book, Man and the Cosmos…He believed that one should begin with what is most ‘clear and distinct’ to his or her mind…and then proceed outwards into the world…When he considered what was most ‘clear and distinct’ to his mind…he proclaimed…’I think; therefore, I am.’ What he began with…was his mind…things in his mind were most clear…most distinct to him. Therefore, when I reexamined the social sciences…well, we know we are animals now… we look at DNA…we are 99 percent the same as a chimpanzee…so the social sciences must be redone…they must be placed on a biological base…So I utilized Descartes approach…and started with philosophy…moved out to psychology…then to anthropology, sociology, economics..out,out to theology…as I began the process of viewing humans as animals.

There is a second thing he probably meant…with the proclamation …’I think; therefore, I am’…The second thing that Descartes probably meant here was…that he was making an empirical observation!…He was making an empirical observation that sneaks up on a person…then pow!…suddenly, you realize that this observation is hard evidence…And just as he was able to deduce a whole philosophy from this one hard fact…this one sentence…this one syllogism…we too can start with it…we can write a book reworking the social sciences…and, in addition, we can hypothesize amazing things. The startling observation that Descartes made…was new…Somehow, no one had really noticed it before…Each person on earth is in a position to make this observation…we all do…yet in a sense we shrug it off and continue on our way. What he observed was…I am thinking, I am seeing, I am acting…I am inspecting the world around me. That I…is different from my ordinary I…It is an I…coupled with an idea…a revolutionary idea…The idea is: I have empirical evidence that there is a part of me…that is different from everything else around me…at least to begin with…There is a part of me that is surprisingly important…This is an idea that lives in my private thoughts…I would never share such an egotistic thought with even my closest friends…There is a part of me that can elevate me to the lofty seat of a king or queen…maybe like a small god…Gee…what is this thing?…We all could use a thing like this…that…and we all have it…Okay, what it is…is an idea…That idea is…that there is something inside of me…that is Cosmic… probably eternal. Why would I think something like this?…because ‘I’…I…dammit…am ‘looking out! I…am the center of the world…of the whole Cosmos! I am…I exist…and this is not merely an illusion caused by a collection of neurons. I am ‘looking out’…and this fact is incontrovertible. As I say…I am the center of the world. I am like a god. Such a realization obviously leads to an enthusiastic acquisition of self respect…All of this is a bit blasphemous … no, it is a whole lot blasphemous…500 years ago…I could well have been burnt at the stake for having the audacity to say such a thing. However, it appears that the whole thing is true…and, the whole thing is startling. Why are we so humble? We each think…know…that we…I…am the eyes of the universe. If we are extinguished…if all ‘I’s are extinguished…the universe would disappear…Bishop George Berkeley went through all of this…but he missed the most important part…Yes, as he said…everything is relative because our ‘I’s are all in different positions with respect to the world
around us…and all perception must be adjusted for differences in perspective..But he missed the most important thing…what Descartes saw right there…at the beginning of his philosophy…Everything is different from me…from my perspective…because I have an ‘I’…quotation marks refer to a something…a particle…that is a part of my brain…that is ‘looking out’. As I say…we are humble…but our experience tells us we should be otherwise…Well, we should be proud of ourselves…Based on that experience,,,we are certainly very special…Of course, there are things that argue …that we are not so special…We can look around, see things and make generalizations…We can conjecture that other organisms, such as our friends, may have ‘I’s also…so maybe, yes… we aren’t so special….The problem with those other organisms…we can never really be certain about them…What I mean is…I am the center of the universe…and each of my friends…feel the same way!?….This is crazy…We can never be fully in another person’s shoes…but she, he…thinks…he, she…is the center of everything, too….I would have never thought…That person!…thinks he, she, it…is as important as I…The nerve!…But it must be the case…All of these ‘I’s…and what it must mean…is inexplicable! Well, that is a conundrum we must leave alone..because like Descartes, there is only one truth we really know is true…really, really know is true…and that…is that…I…anyway, for sure…am ‘looking out’. Yes…that is for sure…The rest of you….God bless you… are on your own. Let us move on to a second point we can address more confidently…We can see that all life dies…always…so we shall, also. Thus, it appears that our ‘I’ will be annihilated…and there is nothing we can do about it. What we are forgetting is that we have empirical evidence of another possibility…another truth. We have an ‘I’…and we are the center of everything. If this ‘I’ were expanded trillions and trillions of times…that great ‘I’…would be a god. It seems that an ‘I’ is too important to be extinguished…it is a gut feeling that we have… Given the startling realization that every animal on earth has an ‘I’ like mine…’looking out’…this gives us a hunch that we can empirically verify our hypothesis…about the ‘I’…because we have reason to believe that this ‘I’ in our brain is a particle…Yes…there is a possibility that we can prove our hypothesis scientifically at the Large Hadron Collider at CERN…What do we know about this ‘I’…so that we shall know what we are looking for when we
start running experiments on particles….If we are looking at particles…then the ‘I’ is not ‘spirit’ like the shamans came up in hallucinogenic trances…What do we know about this ‘I’? Could it be …that if we learn enough about this so called ‘I’…we might know enough to solve major problems in the world…like cancer?

This site uses Akismet to reduce spam. Learn how your comment data is processed.